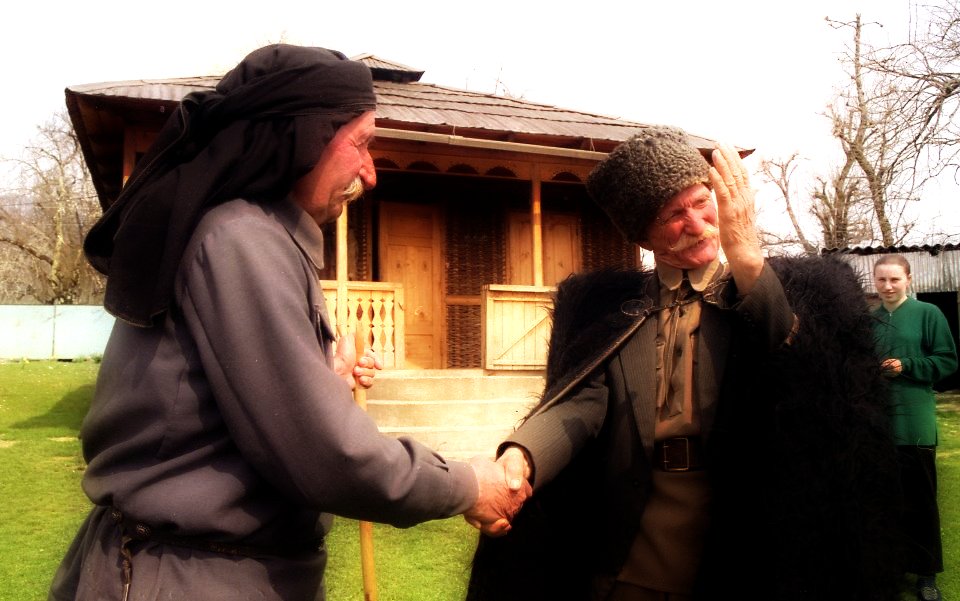 A Glimpse into the Abkhazians’ Worldview

The first examples of Abkhazian proverbs to be recorded appeared in the first grammar of Abkhaz, published by the Russian soldier-linguist Pëtr Uslar in lithographic format in 1862. The three he cited were:

Say little, do much

Don’t look a gift-horse in the tooth

The fish said: ‘I would have said a lot, were it not that my mouth is full of water’

Since those pioneering days, a number of collections have appeared, adding to our knowledge of the genre. The most comprehensive such volume to date is the 2003 compilation by the economist Prof. Oleg Shamba and the late writer Boris Gurgulia, which gathers together from both published and unpublished sources some 8,500 examples, presented exclusively in Abkhaz (i.e. without translation).

Not surprisingly, the man known as the ‘Father of Abkhazian Literature’, Dmitry Gulia, recognised the importance of registering these cultural gems and published a collection of 394 (plus nine conundrums and six tongue-twisters) in 1907. The following year, in volume XXXVIII of the seriesSbornik Materialov dlja Opisanija Plemën i Mestnostej Kavkaza ‘Collection of Materials for the Description of the Peoples and Places of the Caucasus’, Gulia republished the 394 proverbs, but this time there were 11 conundrums and 17 tongue-twisters. His final contribution came in 1939 when he published his 164-page ‘Collection of Abkhazian Proverbs, Conundrums, Tongue-Twisters, Homonyms, Homographs, Folk-prognostications of Bad Weather, Superstitions and Spells’, which included 1,000 numbered proverbs. This work (in Abkhaz and Russian) came out during the years when Abkhaz was written in the Georgian-based script. The content was reproduced in volume 5 of Gulia’s collected works, which appeared in 1985, by which time the orthography for Abkhaz was based on Cyrillic (post-1954), and the Abkhaz material this time was naturally rendered in this Cyrillic-based script; the proverbs in the 1985 publication were not, however, numbered.

The samples of the genre offered below were garnered from the 1939 edition and include the relevant numbering from that edition.

1. One who has lost a goat has also lost the day

36. The death of one whose life is bad is also bad

108. Do for another, learn for yourself

148. Wealth and happiness do not go together

156. The old man said: ‘Would that he who has not witnessed my childhood not witness my old age!’

157. A horse has four legs but still stumbles

175. Better a good neighbour than a bad brother

206. A good daughter is worth two bad sons

221. One who has not been a guest cannot entertain one

232. One who had no field was asking for seed

236. The trap ensnared the coquettish bird by both feet

240. The one they did not notice seated stood up and made himself known

245. Do not mock one who falls down in front of you

246. Two portions do not fit into one mouth

255. The one who was chasing two rabbits caught nothing

260. A clever foe is better than an idiot brother

314. Without a child crying, his mother doesn’t put him to the breast

326. If you look into milk, you’ll always see something black

815. Don’t quarrel with water and fire

867. A lie cannot but sometimes shame a man

868. You can open a castle-door without a key by sweet talk

892. The tongue is the apostle of the heart

918. For guarding a beautiful wife you should have seated at home a strong mother-in-law

929. One bad deed wipes out a hundred good ones

932. A pigeon cannot flourish where a hawk has its perch

939. Gold has neither hand nor foot but can do much

946. What is in a clever man’s heart is on the tongue of a drunk

969. If a woman says that she will deploy her wiles, she will deceive a hundred men

984. If you have no neighbour, you must become someone’s neighbour

986. An idiot catches a snake by the hand

994. He who eats without having laboured cannot know/appreciate the food’s taste

996. If a man blessed with happiness plants a dry stick in the ground, it will sprout leaves

An example of a conundrum from Gulia’s list of 22 would be:

1. That which was born to water, was reared by the sun, and dies, if it sees its mother. Salt

An example of a superstition from Gulia’s list of 58 is the following:

55. If, when a man intent upon digging out a well starts digging, he makes mention of a good spring, the water emanating from within that well comes to resemble that spring

An example of weather-prognostications from Gulia’s list of 47 (and the title of this section makes it clear that the prognostications relate to both good and bad weather) would be:

4. If fish begin to leap out of the sea, the weather will turn bad

And, finally, an example of a spell would be the following, which was assumed to ward off the ‘evil eye’:

2. A white skewer struck into a white eye,

A grey skewer struck into a grey eye,

A red skewer struck into a red eye,

A black skewer struck into a black eye.

I cast the evil-eyed one over seven rivers,

I cast him over the seven mountains,

I blew him over the heart of the sea.

The eye of the evil-eyed one is frozen lead,

Thrice does he [the spell-caster] say it, and on all three occasions he blows thrice.