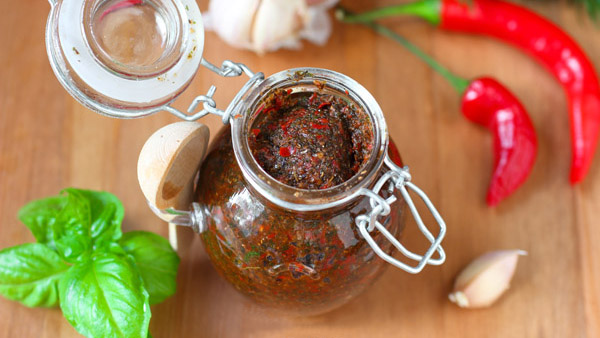 Adjika - Abkhaz relish in the form of a paste-like mass, which consists of c red pepper salt, garlic, herbs (green and dried, hops-suneli). Adjika is usually red, but from the unripe pepper seasoning can be produced green.

Tomatoes are not part of the traditional adzhika, but over time any variations, including different kinds of vegetable puree, including tomatoes. A large part of hot sauces, now offered in stores under the epithet "adjika" contains tomatoes. The word "adjika" of Arab origin and simply means "salt" (or rather, jika as well - the definite article -. Bread (Acha) and salt - a greeting. In Russian- bread and salt.

According to one version, when Abkhaz shepherds went in the spring in the mountains to graze sheep flocks owners gave shepherds salt. Salt makes animals thirsty, and they begin to consume large quantities of water and food that promotes rapid weight gain. Salt was expensive product to the shepherds and they did not steal.  But shepherds perfectly using this mixture as a seasoning and is sometimes added to the most fragrant spices such as coriander, hops-suneli, garlic.

Such a mixture of spices called Abkhaz "apyrpyl-jika”, which means "pepper salt" and the other peoples of the world knows just adzhika.

Sometimes adjika added horseradish root. Before you cook spicy adjika, vegetables carefully cleaned and cut, it is advisable to do it with gloves, so as not to burn your hands.