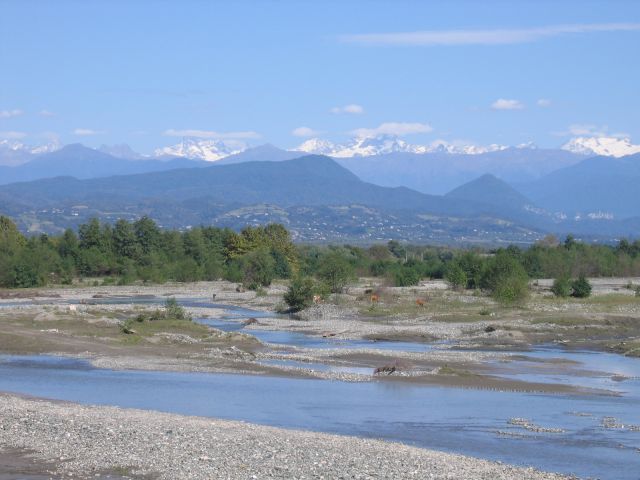 Adzyubzha - a village in the Ochamchira District of Abkhazia. Located in the west district from center in Ochamchira at the mouth of the river Kodor. This village is the administrative center of Adzyubza village administration, village council.

In the north it borders with the village Atara; in the east - with Atara and Arakich; in the south - it goes to the Black Sea coast and borders the village Kindgi; in the west - on the river with the Kodor - Gulripsh district.

In the XIX century in the Adzyubzha rural communities also included the neighboring village of Atara. In the class division in Adzyubzha it had 63 noble, 7 representatives of the Orthodox clergy and 674 peasants.

At the end of XIX - early XX century in Adzyubzha settles a large number of Mingrelians and Armenians, there are Russian settlers.

Adzyubzha is a home to a particular ethno-racial group - Abkhaz blacks. There is no exact data on how and when the Africans were in Abkhazia. It is known that already in the XIX century they spoke only in Abkhazian and considered themselves Abkhaz. The plot of the story of Maxim Gorky's "The Birth of a person" takes place in the vicinity of Adzyubzha. In 1980 Adzyubzha hospital after this story was called "The Birth of a person."

The family of the founder of Abkhaz literature Dmitry Gulia writing, after returning home from the Ottoman Empire, as well as other Abkhaz Muhajirs were not allowed to settle in his native village Uarcha (now Gulripsh district).