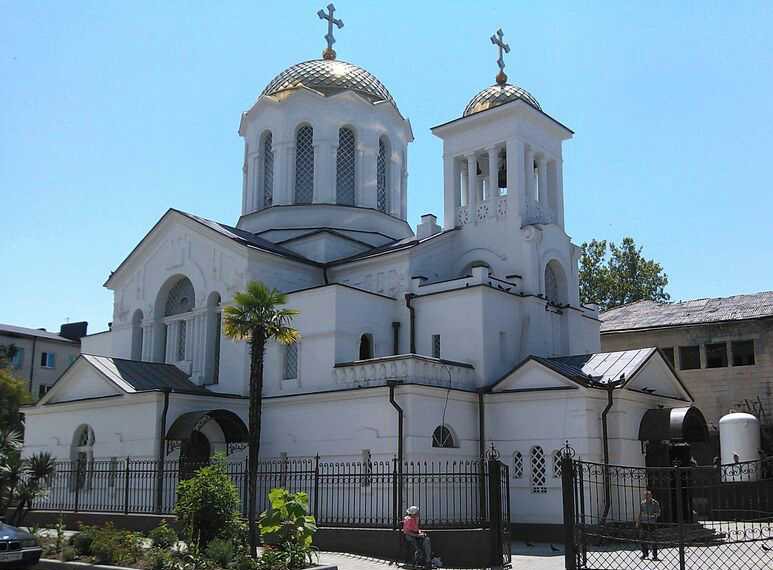 One of the architectural highlights of Sukhum is the Annunciation Cathedral. This is a classic cruciform in plan structure, topped with domes, made in neo-Byzantine architectural style. The temple was built at the expense of the Greek Orthodox community in the period from 1909 to 1915.

Initially, the church was consecrated in honor of St. Nicholas the Wonderworker, and before the start of the Great Patriotic War was known popularly as the Greek Nicholas Church. After the war, the temple received a new, higher status - the cathedral, consecrated in honor of the Annunciation, hence its popular name abbreviated - Annunciation. But St. Nicholas has not been forgotten in this temple, and his name is honored in chapel (1980).

In connection with the expansion of the parish in the 80-ies of the last century, under the leadership of Metropolitan David reconstruction and repair of buildings of the temple was carried out. Finish the more lateral extensions, landscaped the surrounding area, was built and consecrated a chapel in honor of St. Nicholas. Since the beginning of the new century to the centennial of the church, in 2010, were carried out major repair work. One of the major gifts to believers for the anniversary became a gilded central dome made by Chelyabinsk masters. His bright reflections can enjoy not only the congregation, but the sailors on the roads of the Sukhum bay.

Today, the Annunciation Cathedral is the main cathedral in Pitsunda and Sukhum-Abkhazian Eparchy of the Georgian Orthodox Church. Service in the cathedral conducted in four languages: Old Church Slavonic, Abkhazian, Greek and Georgian.

In the cathedral is also an icon of St. Panteleimon with a particle of his relics.