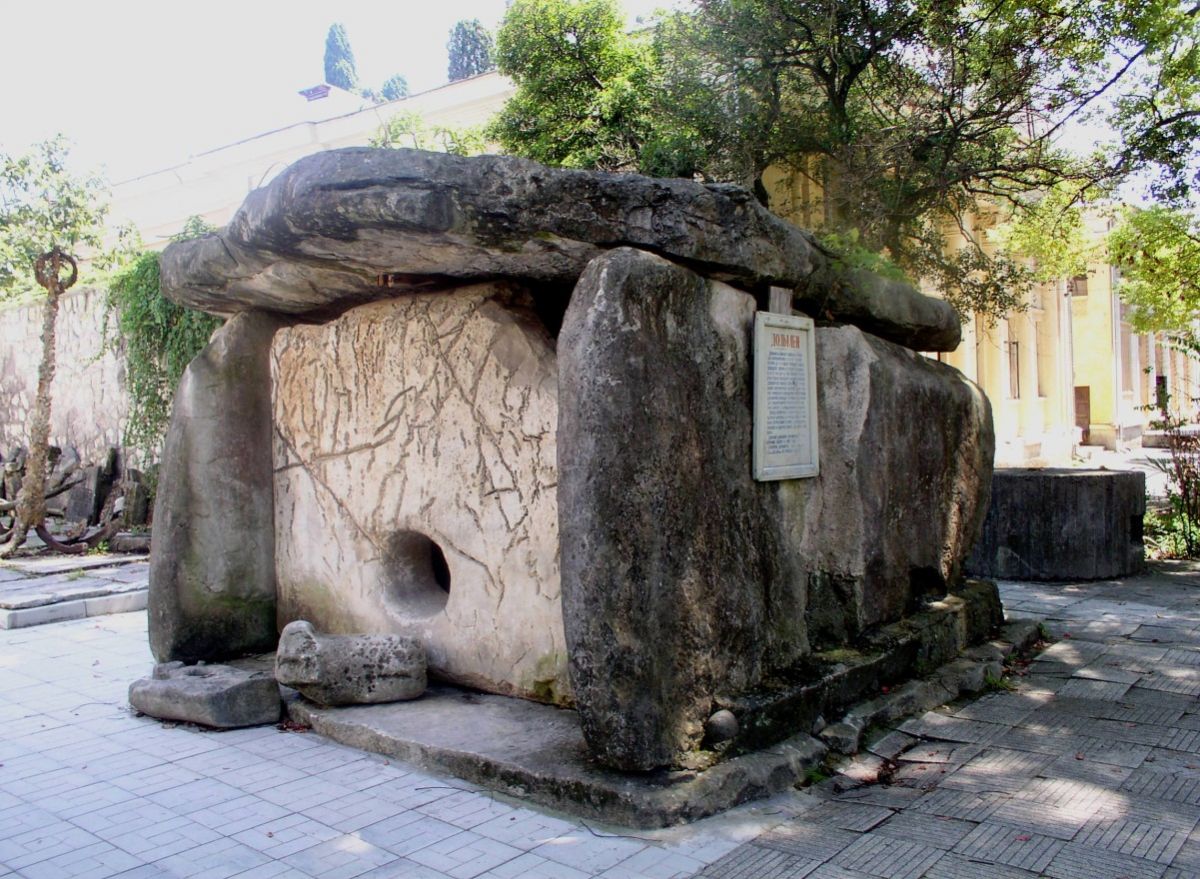 Cult of dolmens in Abkhazia

The earliest artifacts of megalithic culture appeared in the early 3rd millennium BC and continued into the Bronze Age as the so-called dolmens of Abkhazia, typically consisting of four upright mass stones and a capstone, some of them weighting as much as 50 tonnes. A dolmen from the Eshera archaeological site is the best studied prehistoric monument of this type. The Late Bronze Age saw the development of more advanced bronze implements.

Barely noticeable path twists through the woods between the hornbeams and oaks, moving away and then coming near the edge of the cliff at the bottom of which you can see the lake among the trees.  Through 700 meters the path moves away from the edge of the cliff at 150 meters and goes through the woods. Be careful here: although the height of the dolmen with its lid and the bottom of the facade is about 3-4 m, so it is not easy to notice: the walls of buildings are overgrown with moss and ivy. Over the dolmen is an open glade, overgrown with prickly hawthorn. In all, the path to the dolmen takes a little more than half from the crotch.

Dolmens are the burial chambers of the Middle Bronze Age (2000-1500 AD). Historians disagree about the origin of the West Caucasus dolmens. Some argue that the concept and shape of these burial chambers was brought to the region in the second half of the 3rd millennium before the common era by sea from afar (Portugal and Sardinia) and then spread throughout the West Caucasus. Others propose that the burial chambers appeared here independently, citing the evolution of dolmen covered with burial mounds during the period after the end of the third millennium AD and the beginning of the second millennium AD. Close to the Azanta Dolmen you can see the ruins of several other burial chambers. A similar dolmen from the Eshera village is exhibited in front of the entrance to the regional history museum in Sukhum.

A dolmen from the Eshera archaeological site is the best studied prehistoric monument of this type. The Late Bronze Age saw the development of more advanced bronze implements.

The route to Azanta Dolmen starts 30 kilometers to the east of Sukhum in the gorge of the Kholodnaya River (the Cold River). It was once a bed of a tumultuous river but today the whole gorge is overgrown with a fairytale-like box forest: the trees, the boulders, the rocks and everything else are covered with thick moss.

The design of the dolmens has a hint of a solar cult - a hole in them often turned to a more sunny side of the hill. However, this is not a development-fifth the cult of the sun, like the equally mysterious builders of Stonehenge. A Sun worship was almost universal in ancient times, so only this orientation of dolmens risky to draw far-reaching conclusions. An interesting point - some holes of Caucasian dolmens have their stone covering the cork, such as, for example, the Korean dolmens, "house for the soul “. For comparison - in the Egyptian pyramids, on the contrary, there is a special narrow Laz focused on well-defined star to Pharaoh's soul was free to travel to other worlds. And then for some reason, we chose stone plugs, and even in such far-flung regions. Perhaps this is not the house for the soul revered ancestor, a prison for the evil spirit?

Occasionally there are dolmens, carved from a monolith. However, they refer to later times. Experts believe that the most ancient structures are the so-called slab type, i.e. the classic houses of which we speak.