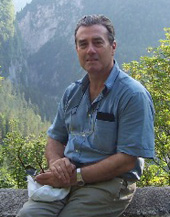 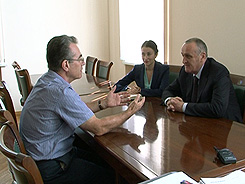 George Hewitt has a lot of published works, books, book chapters, articles, book reviews and other about Abkhazia: Abkhazian Folklore (with grammatical introduction, translation, notes, and vocabulary), Abkhazian Folktales (with Grammatical Introduction, Translation, Notes, and Vocabulary),Introduction to the Study of the Languages of the Caucasus, 'Caucasian Languages, and Georgian, and Abkhaz, and Georgia: the language-situation.', 'A selection of the Abkhaz corpus -- 10 stories translated from the Abkhaz Nart epic.', 'Abkhaz comparatives.', 'Review of Tom Trier, Hedgiv Lohm, David Szakonyi, 'Under Siege: Inter-Ethnic Relations in Abkhazia'., 'Abkhazia: presidential election, political future' and etc.

Recently Goerge Hewitt finished his book on the wars of Abkhazia and South Ossetia. On the 5 of September the President of the Republic of Abkhazia Aleksandr Ankvab met with Mister Hewitt. Mr Hewitt has expressed his gratitude for the meeting and informed the President of the fact that he has finished writing his book on the wars in Abkhazia and South Ossetia. The manuscript will be handed over to the publishers in the near future. However,  Mr Hewitt said that it was challenging to find a publisher in the United Kingdom. Many have refused to publish his book on the grounds that the conflicts are described solely from one point of view.

"The Western friends of Georgia can't even imagine that somebody could write objectively," said President Ankvab.

During the meeting,the issues of Abkhaz foreign and interior policies were discussed. Mr Hewitt was also interested in socio-economic issues, as well as the development prospects of the country.

At the end of the meeting, President Ankvab presented Mr Hewitt a gift of silver coins with depictions of famous Abkhaz writers, and an album dedicated to the first professional Abkhaz painter, Aleksandr Chachba.

As reported by the Department of Information at the President of the Abkhaz Republic.