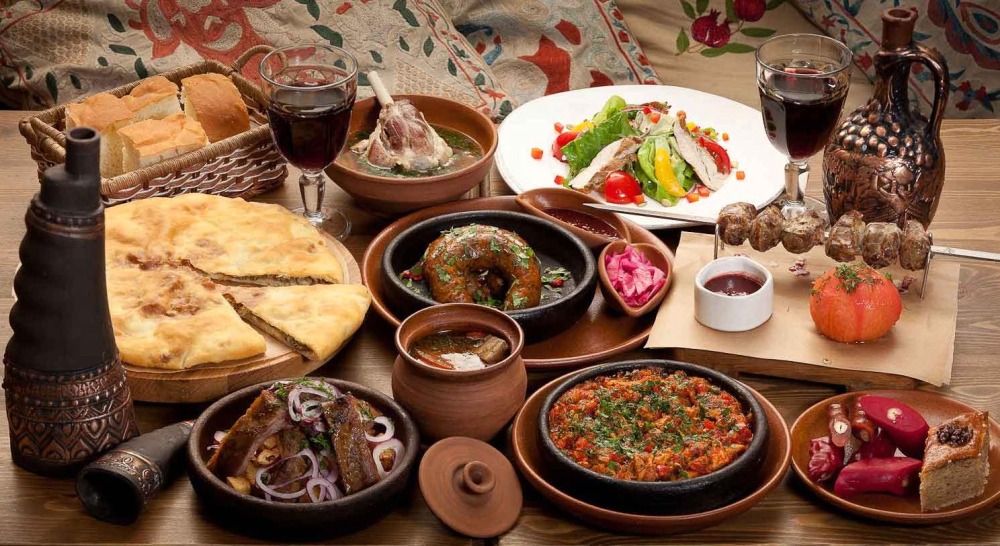 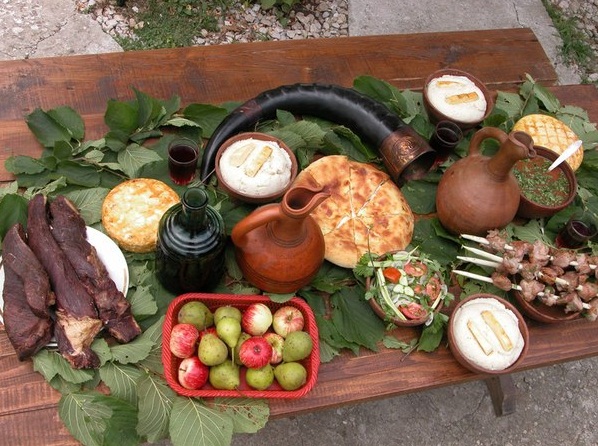 Anywhere, perhaps, customs and ceremonies (including rules of traditional etiquette) are not shown so strongly and clearly as in rural family life, especially in the hospitality of mountain people, because mountains have not only magnificent pastures containing curative endemic plants, but are also reliable refuges for many rare elements of the spiritual heritage of our ancestors.

Hospitality (asasra) according to ancient Abkhazian concepts is a sacred law, obligatory for each and every person. Someone may have many virtues, but not to be hospitable is enough to be morally condemned and, from any viewpoint, to be defective in society.

First of all, it is necessary to understand that a guest certainly cannot offer money or any other payment for reception or services. This would mean seriously offending a host. It is possible to stop at any time with anyone, and a host will offer a guest everything that is in the house and will do all he can to ensure that the visitor spends his time well and has a comfortable rest. Help from neighbours will make sure that any lack of means, or absence of the host or mistress of the house when guests arrive, will be unnoticed.

For the reception of guests in olden times a special house in a courtyard was constructed. Even now a visitor is invited into the best room, which has been specially prepared for him. A guest is seated in a place of honour, whereas the hosts (including sometimes even the head of the family) do not immediately take a seat - even the patriarch of a clan will try not to sit down earlier than a guest, and younger members of the family, despite any persuasions from the visitor, will continue to stand. To remain standing before a visitor, as well as rising at the entrance of any new arrival, each adult considers as a sign of deep respect for him.

According to Abkhazian traditional rules of behaviour, not to rise when a person comes in means to show him disrespect and even in a sense to offend him.

The refined reception offered to a guest involves various activities. From the moment of a guest’s arrival up to his departure time, no matter how long it has lasted - a day or two, or more - he should be (especially if he is an important visitor from distant places) the centre of attention from all family members, and to some extent also from their close relatives and neighbours, who in this case also put aside their own affairs. Quite often family invite worthy neighbours to sit with the visitor and entertain him with pleasant conversations, thereby honouring him, and also senior members of the family will be present at that time. Women and youths prepare a meal in the kitchen in honour of the guest, and secretly kill hens, a goat, a ram and so forth. The secrecy is so that the guest will not know what is happening, and so will not, according to custom, attempt to persuade them not to take any unnecessary trouble.

In a house where a guest is present, order and calmness should reign: all should speak without nervousness, avoid arguments and try to walk more silently without stamping. Inappropriate games and pranks by youths and children when seniors are present are also not tolerated. The best place at the table and during relaxation, the best food, the best bed - all these are for the guest. If he has arrived on a horse he need not worry about it - everything that is necessary will be done by his hosts, who will unsaddle the horse, will feed it and give it a drink, will take it away to a fenced pasture, and will keep it in a stable in the winter.

It is not considered acceptable to ask a guest where he is heading, or what the purposes of his travel are. Such interrogation is considered inappropriate and tactless curiosity. All the best that is available at home in the way of foodstuffs should be placed on the table, for ‘What is hidden from a guest belongs to the devil’. A feast for Abkhazians begins and comes to an end with the ritual of lavabo, which is one of the traditional elements of ceremonial hospitality.

Important value is given to the right places which should be taken at the table, and who should be seated near to whom. This decision is mainly based on the idea that younger people, out of respect for the seniors, should not have a seat near to them, but further away at a respectful distance from them. However, not only age is considered, but also how family members are related. For example, a son should not sit near to his father, nor a son-in-law with his father-in-law, a nephew with uncles from his mother’s side, etc. The eldest of the hosts occupies the place of honour at the head of the table.

In olden days women or girls, except for representatives of the higher class, did not sit down at the table with men. They ate later, somewhere in a quiet corner or in another room, being content with the meal leftovers.

When a guest has been fed and given drink, the best bed in the house is prepared for him. As has been already noted, the life and well-being of the guest are protected and preserved by the host and his entire group of relatives. Insulting a guest is equivalent to insulting the host himself.

When a visitor leaves the hospitality of the house, everyone sees him off in the court yard. A youth supports the stirrup if the guest leaves on horseback, and he mounts only after having turned around to face the house again. No Abkhazians will leave a hospitable court yard without having said a last “Abziarazie!”(means ‘All the best!’ or ‘To the following safe meeting!’). The same wish is the answer to this. According to Abkhazian belief, even the higher forces cannot break hospitality rules. The expressions “You are the guest of the Creator” (Uzshaz umsasup) and “You are the guest of God” (Atsare wesasup) show, in accordance with old concepts, that even God is not of sufficient status to break the rules of hospitality.

Centuries of tradition have accurately defined the principles of mutual relations between contradictory parties, and between winners and the defeated, including guests who had seriously broken with tradition. Enemies should also adhere to some obligatory unwritten rules. So, if an offender somewhere casually meets the man he has offended he cannot attack first, and only has the right to defend himself, is obliged to let his enemy pass, and in crowded places or in a house the stranger should leave immediately as soon as the offended person appears. At a meeting of enemies the right of the first shot belonged to the offended, and a murderer was obliged to arrange the body of his victim, to cover it with a burka, to inform relatives as soon as possible of the death, to protect the body from animals, etc.