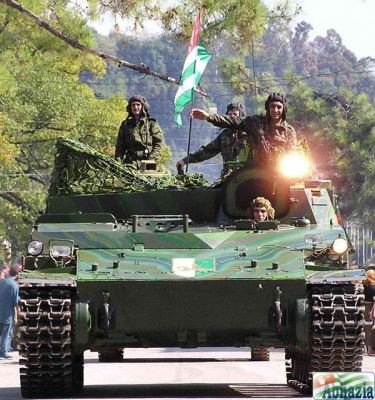 In Abkhazia, August 14th celebrates the Day of the Defenders of the Motherland. In all cities, towns and districts of the Republic people lay wreaths at monuments and memorials dedicated to the Patriotic War of the Abkhaz Nation 1992-1993.

On August 14th 1992 the Georgian army entered Abkhazia and began the Georgian-Abkhaz war which lasted 413 days and concluded with the victory of the Abkhaz nation.

On Sunday, all Orthodox churches of Abkhazia held prayer services in memory of the victims of the 1992-1993 war.

“Today is a day of mourning for all of us. The war began 21 years ago, which brought uncountable misery to our nation. We must look toward the future, we must remain optimists. August 14th is the Day of the Defenders of the Motherland, and August 15th we celebrate the Day of the Volunteer. The first group of volunteers from the North Caucasus headed by Sultan Sosnaliev arrived on this day [August 15th] 21 years ago. The volunteers managed to break through the Georgians in the Gagra District, arrive in Gudauta and head the Militia Headquarters. This has become a key event which filled us with confidence.

Today my feelings are dual. We stand here in the Park of Glory, part of which has been fenced off until a few days ago. The exhumation of the remains of 43 of our boys, fallen in the March offensive, in downed helicopters on Mount Akhbyuk (July 1993), the Marukhi Pass (June 1993) and remains from the Shroma village, was conducted here.

I believe that it is very significant that on this mourning day we are able to give hope to the people whose relatives went missing during military actions. We have managed to organize for the relatives of volunteers who have gone missing to come here and provide their DNA samples. People from Kabarda and Ossetia already arrived and tomorrow we are expecting the relatives of a volunteer gone missing from Chechnya.

I am sure that this is our due in their memory. We are trying to pay our dues, however it is impossible to pay it in full. So many young lives ruined here, and not only young. But we must look towards the future and think of the growing generations. We must try to do everything in our power to diminish the pain in the families of the identified remains buried here.

On Thursday, the first set of DNA samples will be sent to the laboratory in Zagreb. I personally knew many of the relatives of the missing persons who did not live to see the identification. I am very sorry that only 20 years later we have begun this process,” said Prime Minister Leonid Lakerbaya to ApsnyPress.

Today in the village of Baslakhu in the Ochamchira District (on the crossroads of four roads) the opening of a new obelisk in honor of the deceased in the first day of the war – Valeriy Kvitsiniya, Valeriy Narsiya and Rezo Gogiya, takes place.