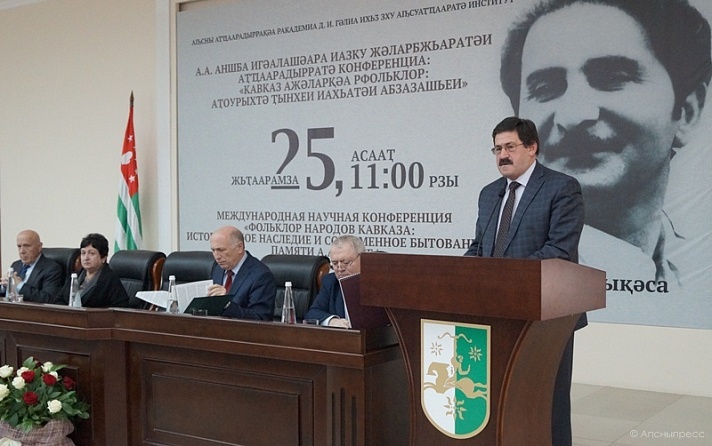 In Abkhazia has opened the international conference “The folklore of the Caucasian people”.

In Abkhazia has opened the international conference "The folklore of the Caucasian peoples: historical heritage and modern existence," dedicated to the memory of well known folklorist, literary, public figure Arthur Anshba.

The conference, which was attended by representatives of academia of Sukhum, Moscow, Maikop, Cherkessk, Istanbul, Elista opened the Plenary. Earlier, the participants laid flowers to the memorial of the First President of Abkhazia Vladislav Ardzinba.

Advisor of the President for Science, Culture and Education, Vladimir Zantariya said: "Within the framework of the international conference we have a unique opportunity to exchange views on topical problems of modern folklore. Anshba Arthur was a man of outstanding creative talent. All of his works are in full compliance with the highest international standards. "

Vladimir Zantariya also noted the significant achievements of Arthur Anshba as a collector of folklore materials. "Most of them are published in book form in 1995, under the scientific editorship of Vladislav Ardzinba. As an analyst, a wonderful polemicist, Anshba deeply versed in the essence and nature of the problems of the Abkhaz literature development ", - said Zantariya.

The conference will run sections in a number of areas of folklore.