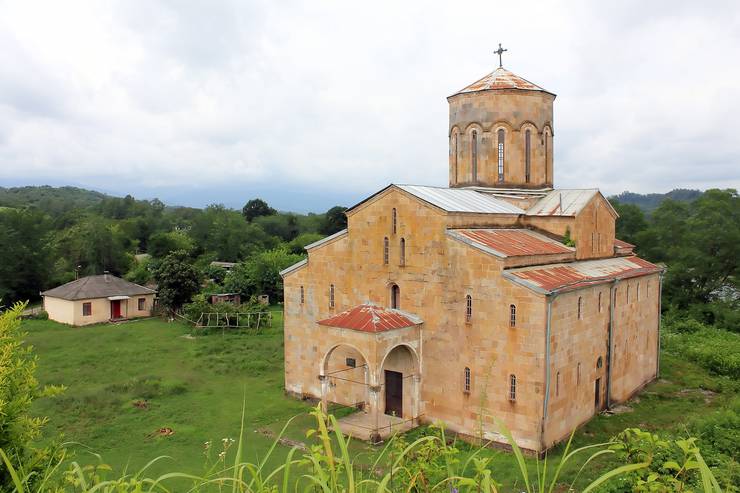 In the village Mokva of Ochamchira district is famous Mokva Cathedral of the Assumption, built in the third quarter of the tenth century by Abkhaz king of Leon III (955-957 years). It even composed an interesting tradition. "Stingy and cruel Leon the III, not wanting to pay the architect for the construction of the cathedral, accused him of violating the terms of the agreement: that with the Dome poorly visible surroundings. The architect, to prove wrong the king, he went up the ladder to the dome. Then the king ordered the removal of the ladder, and the master had died of starvation."

Mokva Cathedral enjoyed wide popularity and is often visited by many visitors. In 1640 it was visited by Russian ambassadors and the priest Pavel Zakharov, the guide to the Mingrelian ruler Levan II Dadiani.

Mokva Cathedral is the only five-naval cross-domed church, the final development of church architecture of early medieval Abkhazia, which began back in the VII - X centuries in Pitsunda. By surviving fragmentary information, inside the cathedral was richly decorated. Its walls are covered in art rare mural paintings. Patriarch Dositheus who visited Mokva in 1659, found here inscription, according to which the church was "painted under Emperor Alexius Comnenus at Great Abkhazian King David," that is, at the end of XI - beginning of XII century.

At the end of the XVII century Mokva cathedral was abandoned.

In the 50 years of the XIX century, the church was renovated, the floor is paved with limestone slabs again, from the west chapel built, and built a small rotunda dome. In the same period, the cathedral was turned into a tomb. Here are buried the last sovereign prince of Abkhazia Mikhail Shervashidze, his son George, the Abkhaz military leaders, etc.

In 1920, the Cathedral from Mokva Cathedral was stolen and taken abroad valuable gospel belonged Mokva archbishopric chair. It was written on 328 pages and is decorated with miniatures and ornaments, made by Mokva monk Ephraim.

Of course, the thousand-year history of the cathedral not been in vain for him. In the same period, the cathedral was turned into a tomb. In 2002 Mokva Cathedral of the Assumption of the Blessed Virgin Mary, after nearly three hundred years break reopened. At 30 meters from the cathedral stands the bell tower Mokva built much later.