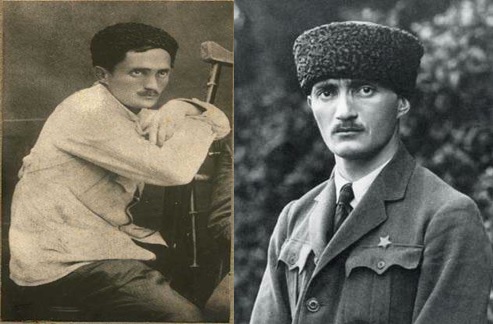 Nestor Apollonovich Lakoba (1893-1936) – an outstanding statesman of Abkhazia. One of the leaders of the Abkhazian Bolsheviks who came to power after the expulsion of Georgian troops in March 1921. During the fifteen years he was an authoritative and indisputable leader of Abkhazia, occupying posts of Chairman of People's Commissars (1922-1930), Chairman of the Central Executive Committee (1930-1936). A strong and strong-willed politician, he was able to defend the political distance in relations with Georgia, which aroused strong dissatisfaction in Tbilisi.

Nestor was born into a peasant family. A few months before his birth his father was killed.

He studied at the parish school, and then in his native village graduated from two-year school. Since childhood, he was very capable.

He graduated from the Tiflis Theological College, where he studied in 1905-1910 years. Then there entered the seminary, where he was expelled for revolutionary propaganda in 1911.

In 1911 he arrived in Batumi, where he was involved in self-education and tutoring at first, and later settled in an orderly city government. In May 1915 he graduated from the Grozny externally School. In 1916 arrived in Kharkov and entered the law faculty, but was forced to abandon his studies and returned to Abkhazia. In April 1917 in his native village on Lykhny peasant gathering he was elected Gudauta district commissioner. In May 1917 - delegate of the 1st Caucasian Regional Congress of Soviets. Organizer in December 1917 a peasant fighting squads "Kiaraz" and its leader.

In 1918 he was one of the leaders of the uprising against the Georgian Menshevik government, the deputy chairman of the Sukhum Military Revolutionary Committee, the organizer of the guerrilla group. In late 1918, the Menshevik government imprisoned in Sukhum, in the beginning of spring of 1919 deported from Georgia.

In 1920, on behalf of the Caucasian Bureau of the RCP directed illegal Bolshevik organization in Batumi, occupied by British troops.

On the personal instructions of Lenin, along with Ephraim Eshba traveled to Turkey in 1921, where they were from December 1920 to March of 1921. They actively participated in the preparation of the treaty (Treaty of Moscow (1921)) between the National Assembly of Turkey (Kemal Ataturk) RSFSR and the RSFSR on favorable conditions.

According to the historian Stanislav Lakoba Nestor Lakoba named his son Rauf (1922-1941) in honor of Rauf Orbaya.

In 1921 Lakoba married Sarie Jeeh-oglu in his parents' home where he was hiding in 1920 by the British occupation authorities. It was noted that Jeeh oglu's family was opposed to the marriage, but Beria and Ordzhonikidze were able to reconcile them.

Nestor Lakoba was elected as chairman of the Central Executive Committee of the Republic (1930-1936).

Lakoba tried to separate Abkhazia from Georgia. According Davlet shackles in recent documents Lakoba was a request to the Stalin of accession of Abkhazia to Krasnodar Territory.

Lakoba visited Extraordinary VIII All-Union Congress of Soviets (November 25 - December 5, 1936), adopted a new Constitution of the USSR, and then stayed in Moscow.

A few days after the return to Abkhazia, he was urgently summoned to Tbilisi for a meeting of party activists, which left the evening of 26 December. Lakoba stops at the hotel "Orient." On the morning of December 27 at Lakoba with Beria conflict occurred, after which he returned to his room. In the evening, the mother phoned Beria and Lakoba asked to come to dinner, after which Beria and Lakoba and his wife went to the theater, which Lakoba left after the first act because of health impairment. Lakoba returns to the hotel, where he dies. Some researchers believe that during the dinner in the house of Beria Lakoba had been poisoned. Lakoba arranged a solemn funeral in Sukhum, which gathered more than ten thousand people. Note that there was no telegram from Stalin.

"Enemy of the people" was announced some time later about Lakoba. They accused him of that in 1929, because of he helped Trotsky to escape from Sukhum to Turkey.

With the announcement of his enemy of the people in one night, his body was reburied in the Botanical Garden in St. Michael's Cemetery. Lakoba's wife was secretly reburied his body in the village Lykhny, native village of Lakoba (confirmed by Adil Abbas oglu).