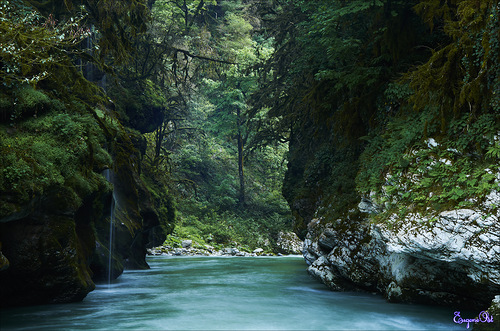 Psou River is a river in the West part of Caucasus. It flows along the Southern slopes of the Greater Caucasus Mountain Range and forms a part of the border between Abkhazia and Russia. The river flows into the Black Sea. The Psou is 57 kilometres long, and the drainage basin is approximately 420 square km. The Psou Valley borders the Gagra Range of Abkhazia to the east.

Psou River flows along the border between the Krasnodar region of Russia and Gagra district of Abkhazia.

Psou River originates from spurs of the Main Caucasian Range, on the southern slopes of the mountains in Turin, 4.5 kilometers west of the mountain Agepsta in a place where the ridges and Ayumga Atezherta intersect at an acute angle. It runs almost parallel to the Mzymta. First, for a west-north-west direction. Then, gradually turning to the left, it forms a gentle arc Psou and flows directly to the south. River flows into the Black Sea in the 7.5 kilometers to the southeast of the mouth of the Mzymta and Adler.

In the lower reaches near the mouth of the river Psou car crosses the highway M-27, which runs parallel to the railway. The nearest station is Merry.

The largest tributaries of the river Psou are Phista and Boesch (Hadean) flowing into it from the left side of the Abkhaz side.

Psou is a typical mountain river. From the source to the middle of it flows in a narrow valley with steep slopes, sometimes reaching a height of 100 meters. Below the confluence of the right tributary of the River Psou Arkva turns south-west and after crossing the ridge formed by the spurs of the mountain Ah-Khach and Dzyhra, flows through a broad valley.

In the upper and middle reaches of the River Psou rocks its basin form limestone, sandstone, siltstone, mudstone, marl intercalations, rarely conglomerates. In the middle reaches - limestone reef, organogenic-clastic, oolitic, at the base of the basal conglomerate, they are added to the clay, marl, sandstone, limestone interlayers less and siltstones. In the lower reaches of the River Psou soils are composed of clays with interbedded sands, sandstones, siltstones, sometimes marl and limestone. The estuary area - diatomaceous clays with pebbles siltstones and sandstones.

The Psou River basin is dominated by mountain-brown soil. Along the banks of the river Psou mainly grow deciduous forests with a predominance of beech. In the upper slopes of the mountains are covered with solid fir forests. In the lower reaches of the Black Sea coast - mixed deciduous forest (oak, beech, hornbeam, chestnut and others).