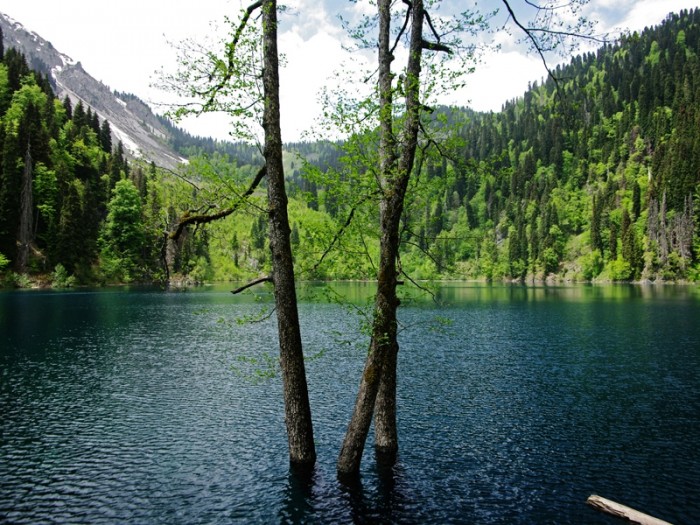 Ritsa relic national park is located in the mountainous part of Abkhazia. Its area is 39 thousand hectares. RRNP established in 1996 on the basis Ritsa Reserve, established in 1930 an area of ​​16.289 thousand hectares. Territory of RRNP located on the southern slope of the Greater Caucasus mountain range down to the middle reaches of the river Bzyb between Gega and Pschitsa.

On the territory of the National Park are concentrated unique objects of nature and historical monuments. The highest point in the park - Agapsta mountain (3257 m above sea level), and the lowest - Blue Lake (107,3m above sea level). Relict Park divided into two functional areas: the protected within which prohibited any economic activity, and recreation and business, combining a variety of load - regulated grazing, tourism, leisure, spa treatment, research works.

The climate of the park, as in all mountainous regions is very diverse, but generally moist, moderately -warm at the bottom and cold at the top. The temperature of the coldest month of February to 1 ° C, the absolute minimum temperature in the highlands of - 30 ° C. The average temperature in August is + 19 ° C, the absolute maximum of + 32 ° C, the water temperature in the lake Ritsa summer comes in the top layer to + 22 ° C, and in the winter (in the rare years) lake is covered with a thin crust of ice. The average annual rainfall in the Ritsa comes to 1650 mm. In Auadharskaya valley snow reaches a height of 5-6 meters. In some places, high mountains glaciers do not have time to melt during the summer.

RRNP Vegetation is very rich. Here are the broad and, Colchis and mixed beech-fir forests, and subalpine crooked and alpine tall and carpets with a rich variety of colors, especially bright contrast against the background of white snow fields and gray rocks. Eastern beech trees reach 40 m in height and 2 meters in diameter, and Norman fir Caucasian or more. It is endemic and relics of the Western Caucasus. There are also the eastern spruce, maple Trautfetter, very rare endemic maple Sosnowski.

In Ritsa Relic national park you can find not only common to animals of the Caucasus: the brown bear, wild boar, wolves, foxes, deer, and unique to the area types. High in the mountains live Promethean voles, Caucasian tur and chamois, mountain chicken and mountain turkey, alpine chough and Caucasian black grouse, as well as predators: the golden eagle, griffon vulture, vulture-bearded.

Reptiles in Caucasian are viper. In the mountain forest zone of rare deer and lynx, birds of Caucasian species jays and bullfinch. From the very rare amphibian frog - Caucasian Parsley Frog and the largest Caucasian subspecies of the gray toad, endemic banded newt. In rivers and lakes trout. Most of these types of plants and animals listed in the Red Book.