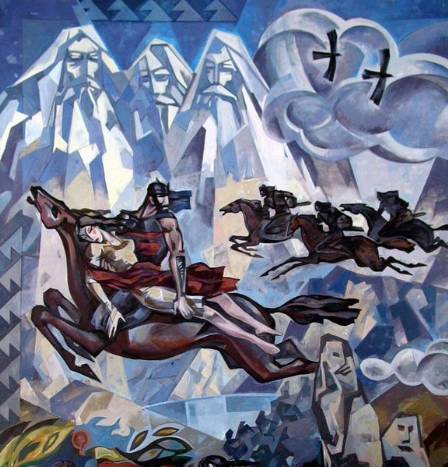 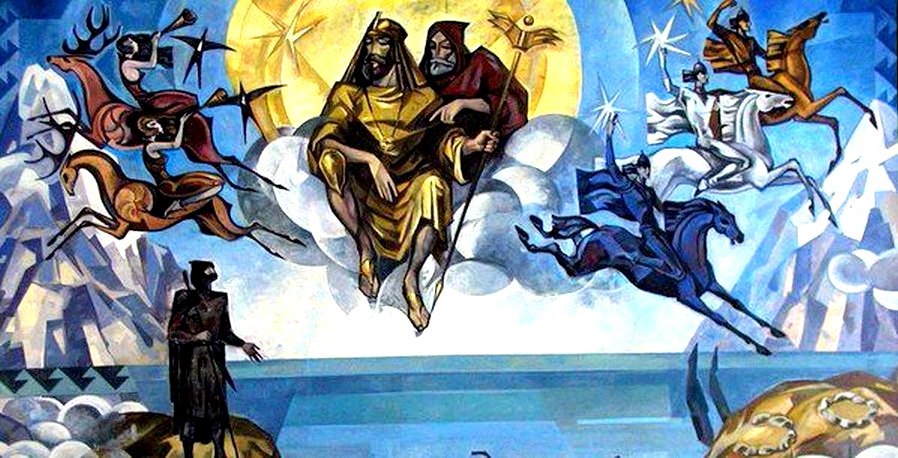 Some features of Abkhaz Folklore

Abkhazian culture is rich with folk poetry and songs, dance and music. Abkhazian folk songs are a combination of vocal melody and chanting. Ancient pagan songs survive to this day, along with work songs, ritual songs, fairy tales, legends, myths, sagas, sayings and proverbs.
Polyphony is a distinctive trait of Abkhazian folk singing. Usually a tenor will start the song, and the other singers will then join in, improvising around the original melody in a lower register. A curious fact: there is no folk singing done by women, except for lullabies and mourning songs. The oldest songs belong to the hunting and herding folklore; more recent ones celebrate particular folk heroes: Khadzharat Kahba, Saluman Bgazhba and others. There is a widely known series of ritual songs performed to ease the suffering of the wounded. Abkhaz traditional mourning and circle dance songs are very expressive and traditional weddings include a theatrical performance accompanied with songs and dance for the occasion.
The most significant examples of Abkhaz epos are the ancient sagas about the Narts and about Abrskil, the Abkhazian Prometheus who had fought the gods.
Nartic sagas are typical for most North Caucasian peoples, with the Abkhaz version of the story being the most archaic, in the opinion of many scientists. The sagas tell of a hundred brothers and their beautiful sister Gunda, and their life as governed by their mother, a wise, eternally young woman called Satanaya-Guasha. The sagas center on the youngest brother, Sasrykva. His many adventures and heroic deeds serve as the plot of the epos.
The tales of Abrskil are of later origin. As punishment for disobeying the gods, the heroic Abrskil was chained to a pole deep in the Otap cave, now known as Abrskil cave, in the Ochamchira region.
The term nart comes from the Ossetian name of Narts, Nartæ, which is plurale tantum of "nar".[1] The origin of the root nar is of Iranian origin, from Proto-Iranian nar for "hero", "man", descended from Proto-Indo-European In Chechen the word nart means "giant".
Some motifs in the Nart sagas are shared by Greek mythology. The story of Prometheus chained to Mount Kazbek or to Mount Elbrus in particular is similar to an element in the Nart sagas. These shared motifs are seen by some as indicative of an earlier proximity of the Caucasian peoples to the ancient Greeks.In the book From Scythia to Camelot, authors C. Scott Littleton and Linda A. Malcor speculate that many aspects of the Arthurian legends are derived from the Nart sagas. The proposed vector of transmission is the Alans, some of whom migrated into northernFrance at around the time the Arthurian legends were forming. As expected, these parallels are most evident in the Ossetian versions, according to researcher John Colarusso.
Dancing is the most popular form of folk performance in Abkhazia. There are several professional dance troupes in the country and several choreography studios for children. The troupes perform folk dances, ritual dances with daggers and burkas (traditional coats with high, squared-off shoulders), and other traditional Caucasian dances.