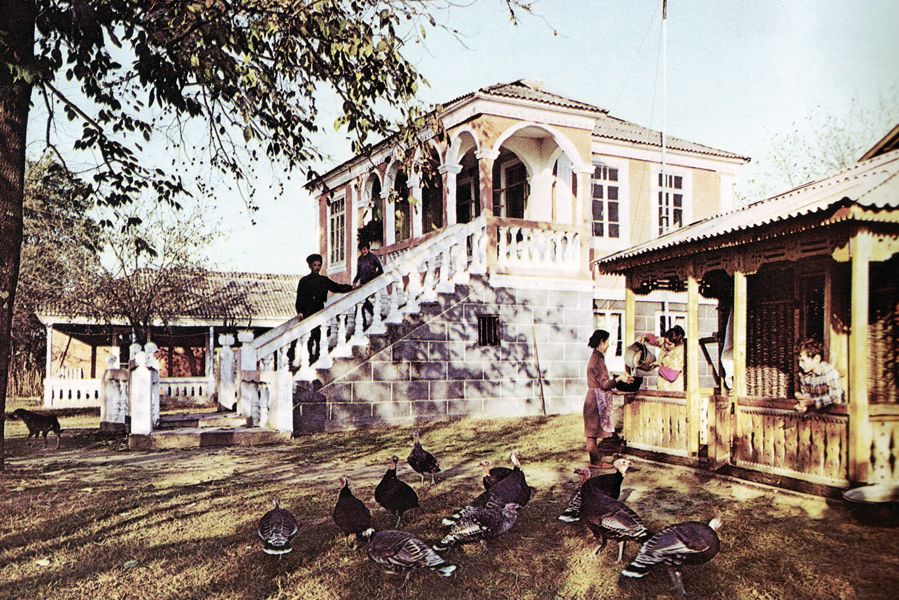 Some features of traditional home life of abkhaz people

The fundamental aspect of everyday home life is personal mutual relations within the family. These relations leant in the past mainly on the principles of submission of juniors to seniors, and women to men, which are patriarchal etiquette regulations. However the patriarchal power of the head of the family over members of the family group, the power of the husband over the wife, the big brother over a younger - in a word, a cult of men and a cult of seniors - never and nowhere reduced the status of women and juniors to a level threatening the further progressive development of a family or society.

For Abkhazians, marriage was connected with the whole system of limitations governing the mutual relations of spouses both between themselves, and with their relatives. Special rules determined the behaviour of each of the spouses in relation to the relatives of the other, including a taboo on certain names.

Among marriage traditions it is first of all necessary to mention the hiding of a newly-married couple from seniors between the moment of betrothal and the end of all wedding ceremonies (or even later), known under the name of the custom of avoidance. In Abkhazia not only the bride hid, but also the groom, who in particular disappeared for the period of the wedding night, and the next evening was violently guided by his friends and led to his bride, then stayed in a special small marriage house called ‘amkhara’. However the next morning, before dawn, he left the house again so that nobody among the seniors would see a newly-married couple together. This usually continued until a reconciliatory junket during he entering into the big house, arranged for two or three weeks after the wedding on the initiative of the companion of the groom.

The hiding of the groom from all seniors straight after the wedding, most importantly from his elder relatives, was one of the most characteristic elements of an Abkhazian wedding ritual. But sometimes a husband and wife for about one year or even more were not shown together to the senior representatives of the family. Also, a man wasn’t supposed to have been present when his father was together with his grandchildren.

Among a number of strong taboos, it is necessary to mention a prohibition connected with names used in conversation. In traditional families a husband and wife in the presence of a third party could never say each other’s names, but use only words like: you, he, she, master, mistress, or simply this, that. A daughter-in-law did not say the names of any of her husband’s senior relatives, especially her mother-in-law or father-in-law. Her husband’s father she called a lord or a big father (dad-du), and his mother a big mother (nan-du), etc.

Whereas a wife is occupied with housework, an unmarried girl more often attends weddings or feasts, and visits her friends or relatives.

After marriage a woman does not break off communication with her own family, who can support her interests at any time, and render to her moral and material aid. She continues to consider her father’s house as the big house. Having some kind of support from her family, she feels more confident in her husband’s house, and he should consider his wife’s family in his relations with her.

Abkhazian husbands even in the past almost never resorted to beating and cursing their wives. A true man considered such behaviour to be taking an unfair advantage, and in disagreement with custom. In a case of cruelty or rough treatment a wife can demand satisfaction or divorce, which even now is still sometimes completed without any formalities by the return of a wife into her parents’ house. At the same time autocratic divorce without sufficient reason (childlessness, deceit, etc.) is not tolerated, and neither is leaving a husband or wife. To chuck one’s wife means offending her entire clan, and a husband should either give a good explanation or take her back again.

In the community women enjoy great respect, especially mothers. Insulting a woman is considered equivalent to a personal insult. In the presence of women, indecent expressions are not permitted at all. To take revenge on a woman is considered to be a shameful act unworthy of a man. Even the most irreconcilable enemies avoid the murder of women from their opponent’s side. Anyone who, contrary to custom, raised a hand against a woman would cover himself in shame, and even an unkind word or action would offend his honour. ‘The good dog does not bark at a woman’, so the Abkhazian proverb says. Protecting a pregnant woman was obligatory, though bashfulness forced her to hide her condition from seniors (and meanwhile her endurance and patience during heavy labour would make any hero envious).

As noted, relations in public between a husband and wife and between parents (especially fathers) and children were characterised by great restraint. To publicly show any special concern for, or to caress, a child was considered as an obscene weakness in a man. It is now sometimes difficult to breach this or that custom, which has perhaps become ridiculous, but was honoured for centuries.

It didn’t matter how poor an Abkhazian was, he began to prepare for his own family by building a small but separate cone-shaped wattled hut (amkhara) for himself at some distance (15-20 metres) from the so-called big house where his parents lived. This was a special marriage premises where seniors did not come and where all the private life of a newly-married couple, separate from the big family and leading to the establishment of their own independent economy, proceeded. The basic sense of this rather reasonable and delicate custom is moral and aesthetic: the personal intimate life of a newly-married couple was reliably hidden from extraneous eyes and they did not sleep at night under the same roof as the seniors. Now the functions of amkhara have passed to one of the most isolated rooms of the modern house. This is fitting, as the word amkhara in a literal translation means non-hearing, though its definitive origin remains undiscovered up to now.

However mysterious and complicated the basis of this archaic practice is, it has survived in some places up to the present time, and it appears to us to be one of the brightest indicators of the high moral and aesthetic development of the people who founded and have continued to follow it.