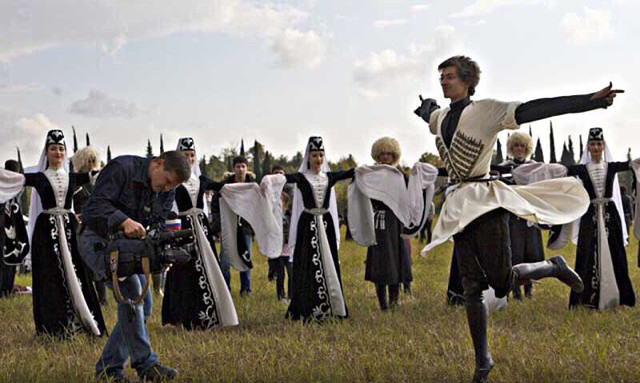 The culture of the feast

The fundamental economic principle of the development of the culture of a feast, and of the table etiquette of Abkhazians, is based upon their traditional agricultural and cattle-breeding activities.

Among dozens of alcoholic and soft drinks, and dishes from vegetable, meat and dairy products which made a rich and in many respects rather original Abkhazian ethnic cuisine, only a few fresh foodstuffs were considered as the most prestigious.

Up until now, they traditionally form the pivotal basis of any Abkhazian ceremonial or funeral feasts. Included are corn polenta (mamalyga or abysta), which during XIX century replaced millet porridge, a wheat pie with a cheese stuffing (achashv), different cheeses, boiled meats from large and small cattle, dishes with walnut filling, hen or turkey with different sauces, the well-known Abkhazian salt with garlic, pepper and other spices (adjika) and local natural grape wine.

Almost everywhere now, the first toast by Abkhazians is for peace, for the people and friendship between them, and that there will be no war.

The content of a toast includes some standard, stereotypical elements, and is said in a loud voice, whenever possible in conditions of complete silence, and represents from beginning to end an improvised speech said in a solemn spirit in which the orator tries to include a maximum of kind wishes for health, happiness and success.

Abkhazian table etiquette expresses sometimes surprisingly subtle nuances of human relations, not always appreciated and not perhaps always clear to an outside observer.

For example, a visitor should under no circumstances be seated near a door or an exit, to prevent him leaving early and make it possible to detain him longer at the table, but the main thing is to ensure in advance that he has a place among the guests of honour. To leave the table and then return back for further participation in the feast is considered unacceptable (or at least, before taking your place at the table once more it is necessary to wash your hands again). Younger people should leave the table earlier and in the same order in which they came into the premises where a feast takes place.

Any meal in accordance with tradition begins with a purely formal, ritually symbolic glorification of God, or much more rarely of Allah. This unvaried ancient prayer says: ‘My God, grant us your clemency! Grant us the warmth of your eyes!’

Visitors leaving the table at the end of the meal express their kind wishes to the host: ‘May you always are in prosperity! Let your wealth multiply!’ The master of the house in his turn with the same compulsion answers: ‘What you have eaten and drunk, let it serve to give you health!’

A lot of these external signs of good manners have long since amazed keen observers in Abkhazia!

All this philosophy is called ‘apsuara’ in Abkhazian, and as we have already seen it is possible to translate this as Abkhazian etiquette in the broad sense of the word, or as an everyday national Abkhazian system of beliefs and norms of behaviour.

Abkhazians since time immemorial have had the reputation among their neighbours as polite and courteous people. At the end of the last century Eugenie Markov wrote: ‘Abkhazians are excellent people with subtle intellects, refined, gifted, the real Frenchmen of the Caucasus…’

As a whole the Abkhazian feast is some kind of a performance, all the basic components of which - from the ceremony of toasts, dances and songs - are in advance provided by tradition and unscripted staging, and the content of which is not only a celebration of life and a show with many faces, but also a self-affirmation of a human person.