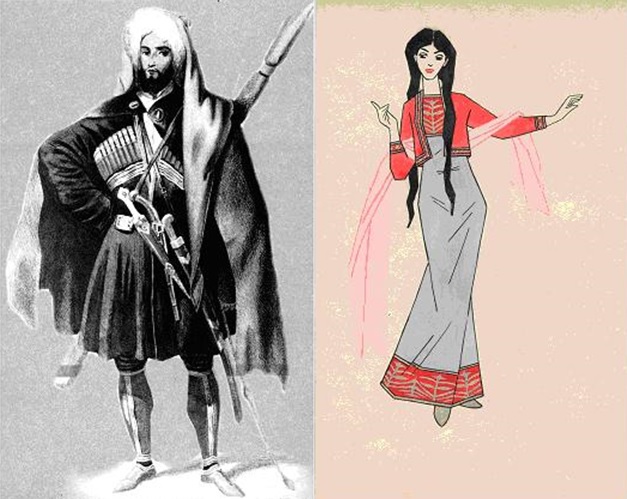 The national habiliment of Abkhaz people

Tastes vary under the influence of fashion and for other reasons, but many traditional elements often show a surprising survivability, and sometimes are even revived. The national clothes of Abkhazians have undergone radical changes in latter times.

Rather recently (1920-30) men in villages wore a Caucasian shirt under a wide belt, trousers in the style of riding breeches, narrow Asian boots, a peaked cap and rather rare Russian trousers. Now all these have almost disappeared. Only the older generation still wears some elements of the old clothes. From parts of national men’s wear more or less often met nowadays (especially on older persons and on shepherds in the mountains) there are a papakha and a hood, a Caucasian belt with a knife, a burka, an arhalukh, etc.

A characteristic accessory of male costume is a traditional Abkhazian staff or wooden pike with a sharp metal tip called an ‘alabashia’. It could serve as a rather thick piercing weapon made from a tough wood (mainly from a specially processed young fir-tree, a maple or a cornel). An alabashia served as a support for a rifle, during walking on mountain slopes and at performances of orators at national meetings. A copy of such a hunting staff from a cornel tree, exhibited in a Leningradmuseum, has a ledge on which they put a gun when aiming. Its length is 115 cm, on the end a tetrahedral steel edge is attached, and the handle is decorated by a ball made from horn.

An alabashia was an inseparable companion of a hunter and of a shepherd. From the early period of cattle breeding the characteristic saying applied to the best shepherds and hunters has reached us: ‘The one who was awarded with a stick earlier then Aergs’. In the ancient sense of this expression, deities of animals and hunting (Aergs) were not only patrons of game, but also the earliest shepherds who first, according to the legend, started to use a stick as a work tool and war weapon. According to one of the legends, a traveller, having lost his way among terrible rocks, hammered an alabashia into the earth and asked it to show him where to go. The stick fell in the direction of a road which could manoeuvre him into a safe place.

However a military-hunting function did not limit the purpose of this weapon, unique in its own way. At the same time an alabashia served as a distinctive sign, as a symbol of a family leader, an elder in a wide-spread family or a national orator who, leaning on an alabashia, proclaimed long speeches at vast national gatherings. Thus an alabashia is one of the most durable elements of original Abkhazian national culture.

Several decades ago it was considered unworthy for a man to appear in public places without a headdress and a Circassian coat, instead of European so-called short clothes. But even the Circassian coat has conceded to time requirements. It has been replaced now by modern European clothes, though the Circassian coat is saved by many older persons to be worn on special occasions, especially for celebrations and during horse-riding events.

Under the influence of modern European clothing, Abkhazian national female wear has almost disappeared too. For example, the ancient long wide-bottomed trousers tightly bunched at the ankles, an ancient corset or breast concealer which was an indispensable accessory of the maiden’s outfit, and others, have been completely superseded.

Among representatives of the senior generation there still exist some strict customs and traditions concerning clothes. Elderly women and even men try to dress so that except for the face and hands, the whole body is covered.

As we see, people in ancient times gave great value to the appearance of a person, and this was understood not only as a natural, physical entity, but also an organic combination of the person and their vestments, including such accessories for personal use as the above-described stick-staff, which together are suitable, pleasant and desirable for their owner in both public and private life.