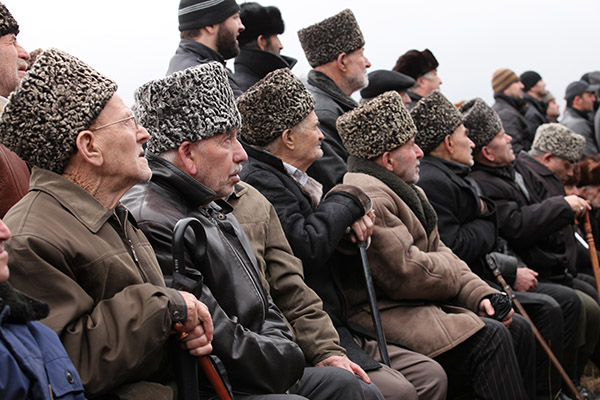 The role of senior age groups

Even among gods there are seniors

One of the subject matters of traditional household culture of Abkhazians is the position of older people, known as seniors, in established Abkhazian society, and the relationship of younger generations with them. High esteem for a senior, irrespective of his origin, national identity, sex, education, or position in society is a traditional law. Throughout a long period of time, the most delicate rules of mutual relationships between people of different ages have been developed. A complicated, mainly unwritten morally-aesthetic code regulating father-son relations, and based on a principle already familiar to ancient Eastern civilizations, was created: ‘Grief and destruction to people if juniors cease to respect seniors’.

It is not necessary to rummage through scientific books to understand the extent of the vast intellectual work done by those who created this specified code over centuries. It is better to look at it in operation, in its practical application. Let us observe young Abkhazians in ordinary life. I don’t mean of course those who, not having really joined either a new or an old culture, give a self-confident and forward-looking, though ultimately depressing, impression, but those who, being quite modern people, have acquired at the same time in their character gold reserves of kind traditions, obtaining these from their environment and making them pleasant and very welcome in society. Such conservatives stand up, for example, when their elders enter, but not simply to concede them a place to sit; they will not sit down until their seniors have done so, and even then not until they are invited to sit down themselves. They will not say a word before their elders have spoken, will not drink too much in front of them, will not be too talkative, will not interrupt their seniors, will not cross the road in front of them even in the woods, will not pass between them, will not enter any building before them, will try politely to guess their wishes, understand the inadmissibility of any lie, deceit or obscene expression not only when speaking to them but simply in their presence, etc. And all of this was not read from books and not learnt by heart, but simply and naturally follows from those daily norms of behaviour which they absorbed with the milk of their mother. People visiting the country for the first time are amazed by the delicate manners of ordinary Abkhazian peasants.

It seems to us that one of the secrets of the renowned Abkhazian longevity is that old people do not feel themselves superfluous or a heavy burden, but, on the contrary, feel quite appreciated. They are shown their usefulness and full value, which promotes their moral and physical strength and endurance. In society and at home, in a circle of children and relatives they receive everything necessary for a quiet life and moral satisfaction, even in cases of long illness. This care, this attention with which they are surrounded by everybody - both kids and adults - gives them confidence, promoting longevity without ageing.

Lately, here and there in Abkhazia from time to time some kinds of family forum are held, which are led by elderly time-honoured men from among the relatives. They arrange a kitty, choose organizers and cheerfully and easily spend all the day long at the oldest family member’s place. Participants at such a feast are all whenever possible namesakes, men and women, old people and youths, irrespective of their place of residence and affinity of relationship. At these wide-spread family meetings different types of conflict questions about daily rural life are discussed, demanding the intervention of skilled and dear people who are the best experts in local etiquette rules, customs and traditions.

The honouring of seniors, as well as an affable relationship with visitors which is expressed in various forms and situations is given numerous displays. The rules and manners of traditional etiquette were developed very carefully - from the lexicon and gesticulations to great patience and courtesy. This can all be related to the fact that the senior is always the first, always the most important, and always the most honoured. Certainly, this inevitably involves a certain amount of self-restraint by those who render these signs of attention, but everything is tolerated which corresponds to Abkhazian decency, good form, or apsuara.

So, probably the first element of the cult of seniors is the standing up at each of their appearances. This gesture Abkhazians consider as one of the major displays of respect from one person to another. ‘Even a cow rises from her place when another approaches her’, they say.

Let’s refer to the legend which was based, it is said, on a real event, and which has a wide circulation among Abkhazians. Once a young man, when his father was out, returned home from a campaign mortally wounded. He was put to bed, and his father soon appeared. Having summoned up his strength for the last time, the son rose to his feet so that his father would not find him lying down. ‘He would have grown useful’ the old man said to himself as he hastened to the door. However, before he could get out, the young hero fell down and died.

A senior is never asked for a light, and in general juniors do not smoke in his presence. They respectfully stand when he delivers a speech or a toast. They do not wash their hands, before meals or after, until he has done so, but must stand and wait; they will not sit down to the table earlier than their elders, and will not begin their meal first, but will rise from the table earlier than the seniors. It is obligatory to submit a light to an old man if he smokes, and to support the stirrup for him when he dismounts or mounts a horse.

Verbosity is condemned. It is not acceptable to talk about love, about women, or even about children in the presence of their father, and in general it is not acceptable to speak to seniors until spoken to. Obscene words and expressions are absolutely excluded. There are very delicate but clear allegories for the expression of all different natural needs. Great value is set on the observance of good form, which requires the ability if necessary to keep silent tactfully, hold back about something or to find a suitable method of polite refusal.