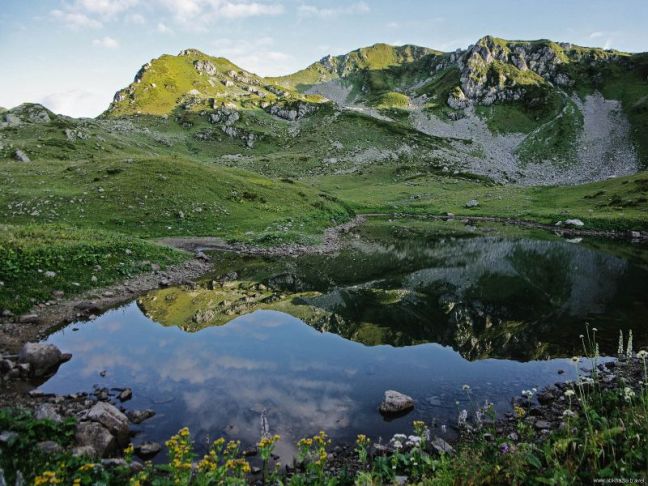 The many-sided principle of seniority finds its reflexion in the various spheres of personal, family and public life. In the past it also had great value during military campaigns, whilst hunting, and in the course of labour activity - in particular, on high-mountainous Alpine meadows where annually in the summer months Abkhazian shepherds from nearby villages by tradition created associations for their joint protection and the pasturing of herds of livestock, whose quantity sometimes reached several thousand sheep and goats. These summer congresses of shepherds, which dozens of people of different ages - from the youngest to very old men - went to, were at the same time an original public university of traditions and etiquette, a school for exchanging experiences. They spent free time in songs and dances, in playing the shepherds archapan pipes, and in sitting around a constantly burning fire whilst telling historical legends, myths, and stories.

It is interesting to mention that in the Abkhazian language the word ‘aihabira’ (government) comes from ‘aihabi’ (a senior). The senior in an Abkhazian group is often called ‘dad’, from which comes the plural ‘dadraa’, with which they addressed foremen at people’s meetings and in courts.

The value given to elders as religious leaders was equally great. In the past each Abkhazian clan (or widespread family) had a patrimonial cult (a sacred grove, sanctuary, blacksmith, etc.) and there was also a priest who carried out the role of an intermediary between the related group and their divine patron. All sacrifices and prayers to the gods were brought by this priest, in the role of whom the oldest representative of the clan acted, as the best expert on national traditions and customs.

According to the Abkhazian spontaneous-materialistic outlook, death at an old age is not only the natural end of a persons terrestrial existence, but in a sense is a blessing for people. As a proverb says, ‘If there were only birth and no death, all the earth would become covered by worms.’

The Abkhazian people, who underwent numerous disasters during their historical destiny, have developed a courageous attitude to the ups and downs of life that found its expression, in particular, in one simple yet at the same time wise national saying: ‘He who created life is the one who also created death.’ Hence, proceeding from this point of view, it is necessary to neither be afraid, nor to aspire to avoid death completely.

Over centuries and millenia, in conditions of military danger and post-war situations, Abkhazians developed contempt for death, a cult of heroism and great presence of mind under any stressful circumstances. And who knows, it could be that this courageous attitude central to the optimistic and reasonable national philosophy of life and death is one of the secrets of Abkhazian longevity.

In spite of the fact that the influence of people of more active ages (approximately from 30 to 60-70 years) has increased more and more, and strict etiquette rules for a person’s final decades in some cases have been softened considerably and became simpler, the honouring of senior age groups, and their role and value in a family and in public life (especially in traditional mountain and foothill settlements), have been largely retained up to the present. Abkhazians respect their family tree, and can list the names of their fatherly ancestors to the tenth generation back.

Addressing God with a prayer, an Abkhazian said: ‘Bringing these sacrifices to your altar, as was done by our ancestors, we ask you to grant us your clemency!’ The motive expressed in the words ‘as was done by our ancestors’ formed a rather considerable part of life for every Abkhazian, living in accordance with traditions. These traditional norms regulated the life of each member of society - for example, a rather late marriage (for men usually not earlier than 25 years old, and in the majority of cases much more senior), no age discrimination of children, their free education and development, early familiarisation with a life of labour (including skills of military preparation), and an unhurried flow of life in a family with a rarity of divorces or other dramatic situations.

In Abkhazian mythology, almost inaudible echoes still exist of the custom of subjecting to death any excessively elderly decrepit old men. Actually, the only legend is that there once lived a man who grew so old that not only could he not be engaged in any productive work, but also could not serve himself. His son, having decided to get rid of a superfluous burden on the family, made a wattled basket. ‘What do you need a basket for?’ his young boy asked. ‘Your grandfather has grown old. I want to take him far away in this basket and dump him from a rock.’ ‘Daddy, save the basket, it will be useful for me when the time comes to throw you into a precipice’ the little boy said. The son of the old man thought that the fate prepared by him for his father would be repeated, and he refrained from his intention. Since then, it is said in the legend, there has been no more custom of killing very old people.

Today, on the whole, almost the same position of seniors - men and women - in a family and in society still exists. All who are younger than them are by tradition obliged to render them respect, help and attention. Anything less is considered as a gross infringement of one of the major foundations of Abkhazian etiquette, and meets a sharp moral condemnation from associates.

In their turn, old men, including those who have passed a hundred years of age, understand their rights and duties defined by centuries of tradition, and try to fulfil them, to make an effort not to grow decrepit prematurely, to keep fit, and to be tidy and neat. They live an active life, and till the end of their days remain (at least nominally) as the heads of their wide spread families, who call them ‘our big father’ and consult with them. They take part in decision-making not only in the family, but also whenever possible in public affairs.

Abkhazian old men display an optimistic outlook on life, and are interested in all new things. For example, 147-year-old Ashkangeri Bzhania from the village of Tamysh examined a plane with curiosity, was excited by electric light, and once when he was shown a picture, this wise person made the remark: ‘The picture is very beautiful, but why are people not present in it? Willows are growing - they were planted by a person. Here is a school - it was constructed by a person. It is essential that a person should be there.