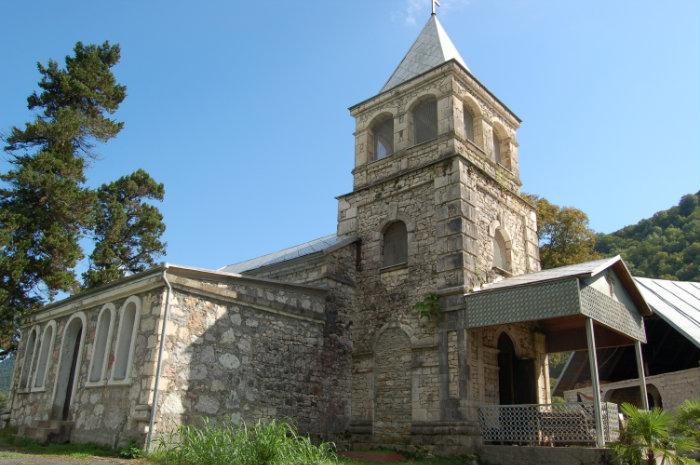 Kaman Village is located in 15 kilometers from Sukhum, on the western reaches of the river Gumista.

The road to Kaman begins at the Institute of Experimental Pathology and Therapy, and goes into the mountains past the monkey nursery. On the left is the mountain Yashtuha, right-Byrtsha mountain. On the southern slopes Yashtuha was found prehistoric man, one of the largest and most ancient in the whole territory of the former USSR.

Further our path lies through the village with the oldest Yashtuha Michael's cemetery. On its territory there is a small Church of the Transfiguration, in which the services are held and committed church ceremonies.

During the Patriotic War of the Abkhaz village was the scene of fierce fighting. Georgian troops in the village organized a powerful line of defense, and only breaking through it, the Abkhaz army was able to liberate the Abkhaz capital Sukhum city. Now the village is in ruins, destroyed homes along the roads, orchards, wild, overgrown field.

Source St. Basilisk is located further to the right on a country road. According to local legend, the source of scoring out of the ground at the spot where the saint was beheaded Basilisk. Water source was believed to have healing powers, and by the prayers of St. Basilisk today miracles are wrought in the lives of everyone.

Next on the left side of the dirt road that goes along the course of the Western Gumista visible ruins founded in 1898 by a female Basilisk-Chrysostom Monastery. The number of novices in it has reached 300 people, which allowed the monastery to conduct large-scale economic and educational activities. In Soviet times, in the ruined monastery buildings nearby nursing home.

The temple was rebuilt in 1991 on the ruins of an ancient temple of the XI century, which was a stone structure without protruding out of the apse, with the inner altar semicircle. The room is lighted by two narrow windows placed at the altar in the west wall. At the end of the XIX century to the church were added two chapels and three-storey bell tower. The fields around the temple was surrounded by a stone wall, as in the present.

Emperor Michael III ordered the embassy to send the Abkhaz land. In the year 850 there was the third and final acquisition of Saint John the Baptist. At the same cave, relics, remains miraculous image of St. John. The very same chapter was moved with great honor to Constantinople. A grotto, where the monks hid it, now revered as a holy place for Christians around the world.