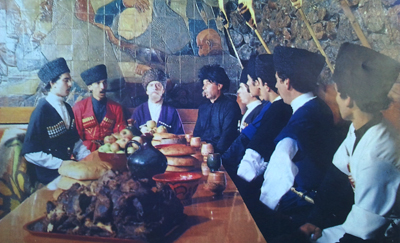 Who once visited the Caucasus, will never forget the hospitality of Abaza people. In response to a simple greeting every passerby will hear: “Come on in, be our guest!” It is a genuine invitation, and not just a courtesy.

Since ancient times, Abaza as Adyghe in general, engaged in cattle breeding, poultry farming and agriculture, which has had an impact on their national cuisine. A special place in the kitchen takes Abaza lamb, beef and poultry; it contains a lot of dairy and vegetable dishes, as well as baked goods. Moderately spicy dishes have high taste, so many of them have become the property of other people’s cuisines. Especially popular are dishes of poultry, so “dzyrdza” sauce chicken is a favorite dish of many people of the Caucasus.

“With a guest happiness comes” – say Abaza people. And to honor guests who visited the house, they sacrifice animals, most often, it is a sheep. Parts of the meat will be chosen according to the age of the guest, the elder will receive left scapula, humerus, divided into two parts, the hip, which can also be divided in half, add to them some secondary or less important parts of the animal. If there are too many elders at the table, large spinal bones are added to the list.

In the days of our ancestors there were not more than two or three persons at the table. Food, especially distribution of meat was a great responsibility, any mistake was unacceptable. It is considered a disgrace to the whole family, and especially for the hosts. Now, even if a lot of people at the table, lamb is not divided among them in equal parts. Two elders of the table will receive half of the animal’s head which should be put so that ears looked up, and its nose was turned to the right, to the eldest of the guests. In a bowl put the left shoulder blade, divided femur, vertebrae, ribs and separated bones.

Female guest was given an edge, also divided in two parts, the elbow, and the tounge. If guests cooked chicken or turkey, the breast will be given to the elders, together with wishbone and thighs. Earlier Abaza never put pure broth without additives. They molded small balls from pastry and fried in butter and add to the finished soup. In our time just put the broth, without any additives.

Women who have a perfect skill of using fireplace utensils, trying not only to make each meal delicious, but a lot of attention was paid to the appearance of cooked food. Adyghe and Abaza can cook 20 different dishes just from beans and pumpkins. Many dishes are also prepared from maize and millet. Our grandmothers paid particular attention to the sweet table. They prepared several types of halva: millet, millet flour, fried dough. Extensive use of fruits: apples, pears, plums, dogwood, and nuts. They cooked fruit drinks, stewed fruit, dried for winter.

Abaza as Adyghe, never paid attention to fish products. Fish was mostly dried and salted. At the table, there was no place for spirits. They used white and red wines, boza, and the national honey drink.

Of course, over time, the national cuisine has undergone tremendous changes. These changes are related to new developments in the economy, the growth of trade. For example, the way the baking of bread has been changed. Abaza learned from Russian to prepare various soups, vegetable dishes, and sour dough.

The cuisine of the Abaza and Circassian has many similar in taste, but different in the way of cooking. Our nations cook meat and `abysta` in similar ways. Mutual enrichment of national food range enhances flavor, not blurring the lines of their identity.

In Abaza widely popular kebab in Abaza way, as well as barley bread, various cakes, fried in butter, lamb intestine, braided with rice, delicious homemade sausage with spices. Abaza table remains nutritious and varied. And most importantly, it is always set for guests.